An explorative sound map of a six weeks journey through Southeast Asia. 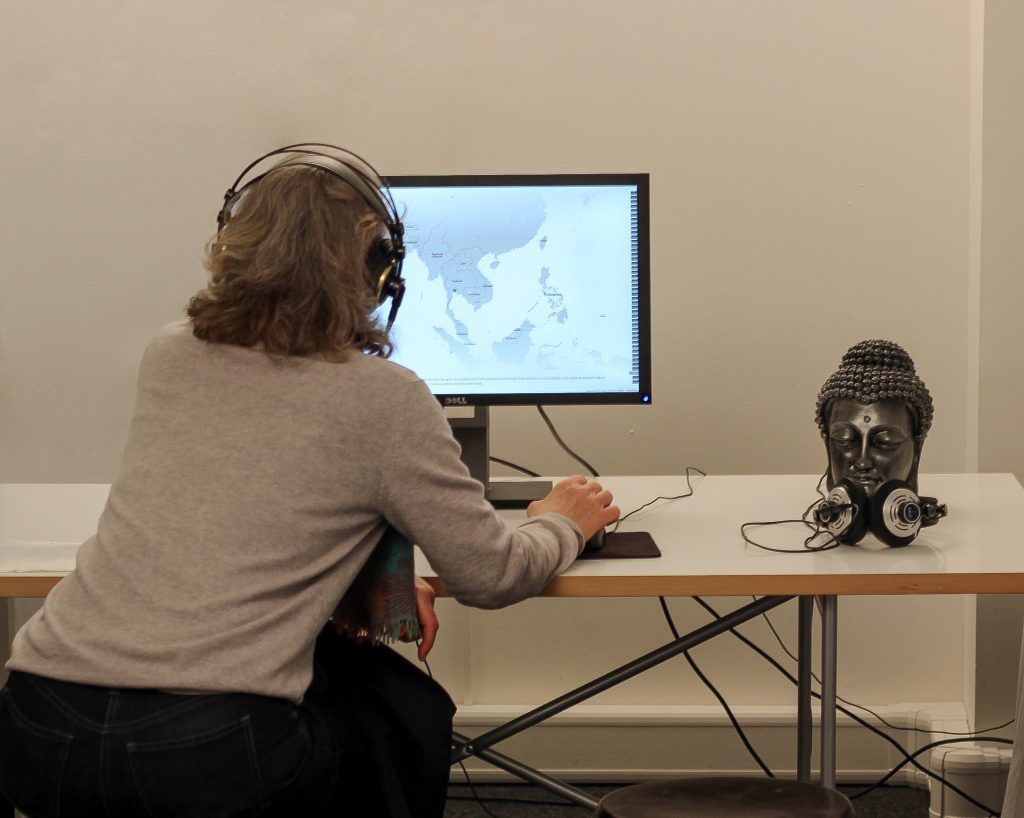 Sounds of Asia is an interactive and explorative map, containing sounds of a 44 days long travel through Southeast Asia. Functioning as a sound diary this web application integrates a timeline of daily sounds as a different approach to tell about a personal journey. Set up as an interactive experience, specific soundscapes associated with dates and places can be played back using reduced listening but still conveying content in a personal manner.

Our initial intention was to create a new approach to a travel diary, which normally consists out of written text, photos and memories. We came up with the idea of not saving the visual aspect of places, but the audible one. The project got inspired by the concept of soundscapes, which was developed by R. Murray Schafer in 1977. In our case Southeast Asia was our field of study and the sounds within our sound diary are characteristic features of those places we visited.

In order to give the listener the chance to fully immerse with the sounds, we decided to unfold the description after the first playback was made. Hereby, we partly followed the concepts of reduced listening, which was introduced by Pierre Schaeffer in 1967. In reduced listening you focus on the sound itself and its independence of the cause. By unfolding the description later, we ensured a reduced hearing to focus on the sounds, but still offer the possibility to receive more information. For the same reason we planned to leave out any photos. In terms of the user interface we wanted it simple and clean to have little distractions. Reduced listening only works without any influences and distractions.

In total we visited five countries: Thailand, Vietnam, Cambodia, Singapore and Indonesia. The time we spent in each country differed. In total, we travelled for 44 days with a travel group of six people, of which four persons were part of this sound diary project. We took one recording per day and wrote down the date, time, description and location of the track. Each sound was recorded for at least one minute with the intention to shorten it for the diary. This gave us enough material to cut out unwanted noises or less interesting parts. In the end, we limited the length of every recording to 30 seconds. We made the conscious decision not to talk during the recording to keep the authenticity of the places and surrounding. However, we were aware that the sounds will become less personal by doing so.
After returning back home from our trip we started with the design of our interactive map. We agreed on a warm color palette to suit our perception and atmosphere of trip around southeast asian countries. To navigate our travel routes chronically by choice, we integrated a vertical timeline. By using a more casual font for the descriptions, we emphasized the look of a diary.
The programming of the application was done by using HTML, Javascript and CSS. The Google Maps JavaScript API was used to integrate the map into our application. The map was adapted to our design vision by using the Google Maps Styler. The contextual information of every sound was linked with the files dynamically by using a JSON-file.

The Sounds of South East Asia had been part of the Hochschultage 2016 of the Hochschule für Künste in Bremen. We got a very positive feedback and many visitors tried it out. Two of those visitors were a couple, who did almost the same journey as we did – they were amazed of the different kind of travel diary and interacted with our application for quite a long time.